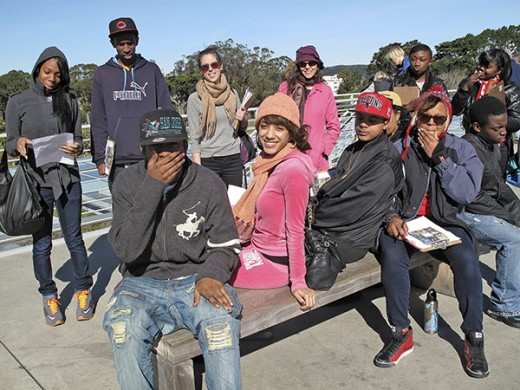 On January 28, 2012 the new 2012 spring cohort of the BEETS (Band of Environmentally Educated and Employable Teens) spent the day at the California Academy of Sciences. They started up on the living roof and had a tour by an academy docent, then took a quiz to find many flora and fauna living up there. This open-air observation terrace enables them to get a close-up look at the roof’s lush canopy of plants. The view encompasses the densest concentration of native wildflowers in San Francisco. The expansive vista was an ideal location for watching Northern California’s birds, butterflies and insects.

Then they descended to the Rainforests of the World exhibit. The rainforest is contained within a spectacular 90-foot diameter glass dome. It’s the largest spherical rainforest exhibit in the world.

The BEETS followed a spiraling path up through the exhibit, experiencing what it’s like to actually walk in a real rainforest. Temperatures are maintained at 82-85 degrees Fahrenheit, and humidity is maintained at 75% or above using a unique misting system. The rainforest was teeming with 1,600 live animals – including 250 free-flying birds and butterflies, 100 exotic reptiles and amphibians. There was also 100,000 gallon “Flooded Forest” tank, where hundreds of tropical freshwater fish cruise overhead.

Then it was off to see the white alligator and lunch, and some free time to explore. A great day long to be remembered.