Saturday October 16th, 2010, CommunityGrows had their fall fundraiser in the Koshland Park Community Learning Garden.  We started the day with Jacob Moffet (joined by his daughter Jasmine) and Max Van der Sterre helping us pole and string lanterns throughout the garden and erect flags on the wall of the garden on Page Street.  A great slue of wonderful students from Washington High School also joined us to get the garden ready for the day.  Joined by other amazing volunteers, they set up tables, carried equipment, and went through the park–cleaning, sweeping, picking up trash, and making everything beautiful.  The success of the day was because of over 40 great dedicated volunteers who pitched in from 10:00 A.M to 5:00 P.M.  Thank you so much!

Our first band was Tiny Home.  Tiny Home is Sonya Cotton and Gabe Dominguez. Sonya and Gabe have been singing together professionally nearly since the day they met, in August 2007.  First, Gabe joined Sonya’s band (Sonya Cotton) singing harmonies and playing the flute.  Then Sonya joined Gabe’s band (SHAKE YOUR PEACE!) singing harmonies.  Check them out here.

During the presentations, youth and family members spoke about their experiences in the CommunityGrows programs and put in heartfelt pitches for donations.  Vallie Brown presented CommunityGrows with a Certificate of Honor signed by all the San Francisco Board of Supervisors.  Phil Ginsberg spoke of the good work CommunityGrows has done over the years to provide a shining example of positive, active use of our park spaces.

The silent auction which included outstanding items from City and local restaurants and businesses, ended on a high note with a parade and performance by Trash Mash-Up.  Trash Mash-Up is a community art project which gives participants the opportunity to construct “Maskostumes,” original pageant masks and costumes inspired by traditions from around the world.  Youth from the neighborhood and their caregivers dressed up and paraded through the crowd.  It was the highlight of a great afternoon, so colorful and joyful!

Great food was provided by Emergency Dessert, Greens Restaurant, Kate’s Kitchen, Starbucks, the SF Zen Center, Cafe du Soleil, and Estella’s Sandwiches.  Partners for the event included Hayes Valley Apartments, van der Sterre Construction, Mo’Magic, SF RPD, Trash Mash-Up and the Walden House.  Thank you everyone.  CommunityGrows would also like to thank all the youth and adults, and merchants who made this fundraiser and smashing success.  Over $5,000 was raised.  Thank you for a great day!    See a video from the celebration! 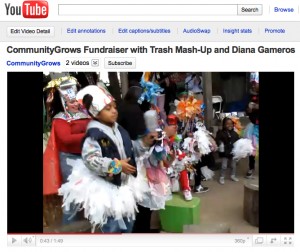