The BEETS go to Yosemite and meet Shelton Johnson to learn about the Buffalo Soldiers!
Read all about it with a first-hand report from one of our BEETS intern, Ivan Galdamez below: 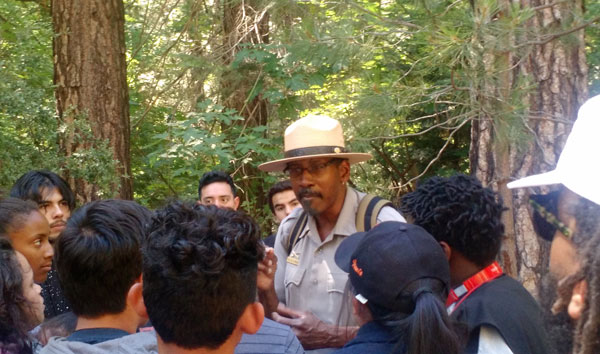 Yosemite BackyardBound camping trip is a memory that will forever be ingrained into my life. The 3-day camping trip was an amazing experience filled with activities, beautiful sights and leisure time. The main focus of our visit to Yosemite was learning about the Buffalo Soldiers and the difficulties they faced. Crissy Field Center’s Inspiring Young Emerging Leaders (IYEL) program hosted the trip and four other organizations attended: New Leaf, Bay-Peace, the Green Rangers (a Youth Stewardship Program of the San Francisco Recreation and Parks Department, and CommunityGrows. New friends and great experiences.

On Wednesday, June 22, around 8:30 AM at Golden Gate National Parks Conservancy Crissy Field Center, IYEL led a couple of ice-breakers to help solidify friendships and meet new people so everyone could enjoy the trip as much as possible. Every group listed their hopes and fears for the trip. Around 10:30 AM the charter buses arrived and everyone received a free water bottle for trip. You can feel the excitement and anticipation people had. The air was filled with positive energy and made the trip a wonderful experience. 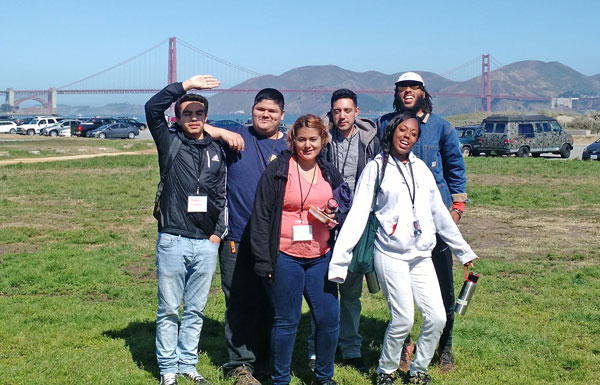 After four hours of resting on the bus, we entered Yosemite National Park and the minute you look out of the bus windows you are greeted by the beautiful mountains above us and the elegant river rapids below us. It was such a beautiful view to wake up to. It filled me with euphoria and made me reminisce back to the very first time I went camping and how much I enjoyed the national parks. 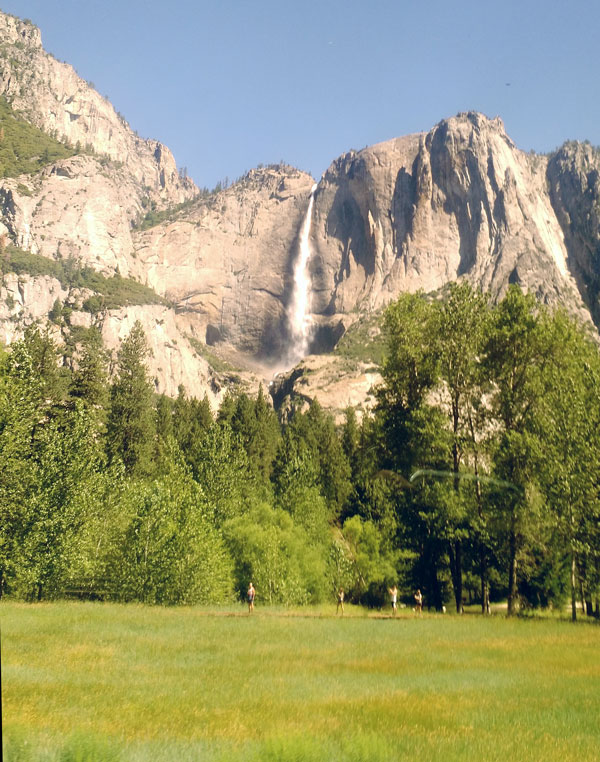 Upon arriving to the Yellow Pine VIP campground, we were greeted by a friendly and enthusiastic park ranger named Shelton Johnson, the man who wrote the book Gloryland and met President Barack Obama the week before. He had so much pride in the National Park it even rubbed off on us. After showing us to our site, he huddled everyone together into a tight crowd around him and began speaking of the legendary Buffalo Soldiers. Shelton made it his mission to spread the word of the Buffalo Soldiers and inspire all youth from different backgrounds to stand up for what they believe in. The speech he made on the Buffalo Soldiers was a very inspiring story on how African Americans defended the National Parks before the National Park Rangers were established.

After the introduction with Shelton, we set up camp, made the tents, and put away our luggage and started some fun activities. 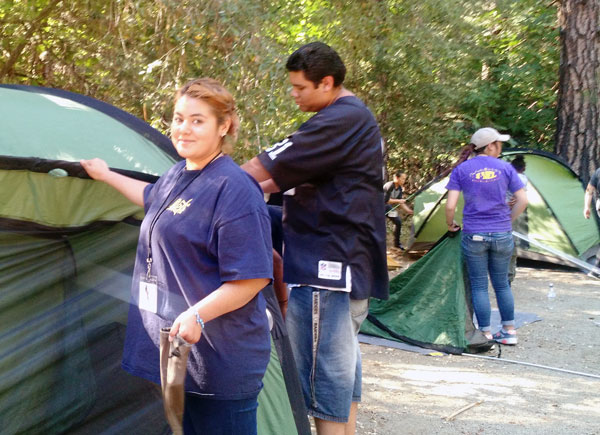 Around 6 PM, IYEL interns prepped dinner by cooking sausages and even had vegetarian options, which I thought was very thoughtful. After dinner the IYEL took us on a mini 20-minute hike to a beautiful riverside where we crossed via bridge and began to play a game. The game was meant as another way to get everyone comfortable with each other and it was very effective because everyone was having a great time and everyone participated. My fellow co-worker, Alejandro, told me how much fun he was having during the game and enjoyed the walk.
After playing the game, we walked back to the campsite to get ready for bed and I shared a tent with my co-workers Alejandro and Carlos. It was a unique experience because we talked about each other’s interests, hobbies, and life goals while sharing personal stories that helped us grow closer as a community (now I see why my group is called CommunityGrows! Ha! Ha!).
It is Thursday, June 23, and everyone woke up around 7 AM. We had to prepare for a long, active day that included volunteer work and workshops. After breakfast, we split into two random groups, with different people across the 5 organizations that joined the trip. Carlos, Linda, and two CommunitGrows staff (Cha’Shay and Jay) picked up trash near Yosemite Falls. 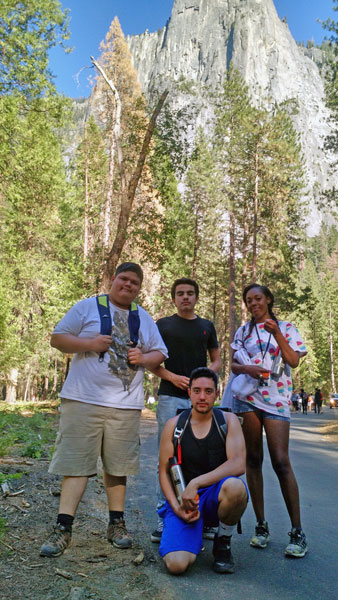 Community Grows staff Melissa, Alejandro, and I were put in a different group with 10 other people from the various organizations. We would play “competition” games that symbolized different hardships the Buffalo Soldiers faced. An IYEL intern would lead each game. We played a fishing game first and what we had to do was craft a toy fishing pole with PVC pipe, string, tape, and a magnet. After, we would go and collect as many magnets (fish) within 10 minutes. The purpose of the game was to symbolize the way Buffalo Soldiers caught food while defending the National Parks. When that game ended, we switched over to a table where we played blackjack, and gambled with the currency the IYEL intern provided which consisted of cards labeled with clothes, water, and food. This game symbolized how risky it was to be a Buffalo Soldier and oftentimes they had to gamble valuable items because of the lack of resources they had.

We then moved to a game where we had to knock as many cans off a log from a distance with a small ball within 3 minutes. This game demonstrated target practice that the Buffalo Soldiers had and how difficult it was to do their job with poor equipment. In the last game we played, one person had to block all the small balls being thrown by four people from entering the three hula-hoops that were arranged behind them. This game was my favorite because it represented the Buffalo Soldiers as defenders against poachers. It was used as a game to show that if people banded together, they could tackle any issue that we face in modern times.
After the games, the groups would join together again and go on a 30 minute walk in which three IYEL interns would play a role as a former Buffalo Soldier and recreate how specific soldiers overcame obstacles during the segregation of America.
After lunch, we walked to the base of Yosemite Falls. It was one of the most beautiful sites I have ever seen, and Alejandro agreed. We were able to climb the rocks to get closer to the waterfall and IYEL took amazing photos of all of us there. Because Yosemite was very hot, the breeze coming from the waterfall was refreshing and felt as if nature provided a natural air conditioning. 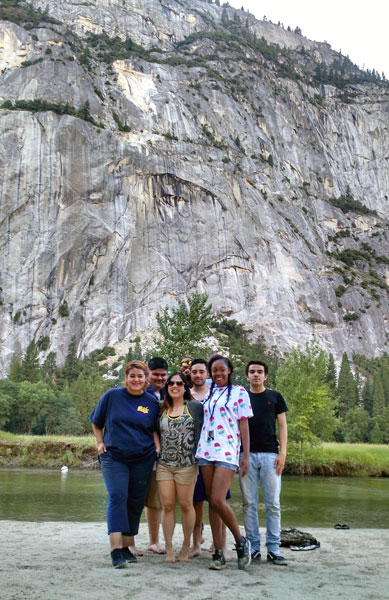 While walking back to the campsite from the waterfall, we had a great view of Half Dome. Melissa Tang, our BEETS Program Manager, told me that she climbed it before with her father. I thought that was very courageous, because the mountain looked steep and a little scary. After arriving back at the campsite, we had an hour to rest and everyone went to a nearby river to swim. You could see everyone’s joy and how much they loved the trip. It was so refreshing to be around such positive energy inclusive to everyone. 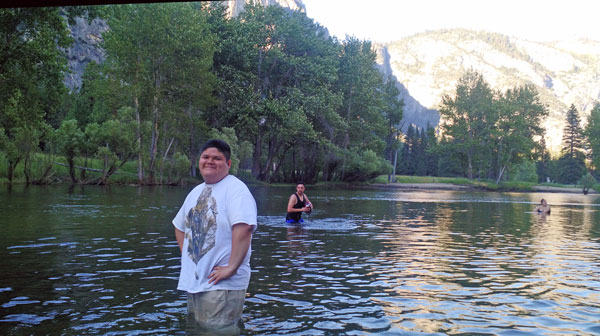 Carlos, Jay, and I were some of the few members from CommunityGrows to enter the ice-cold water. At first, Carlos and I started with just inserting our feet, but a friend from New Leaf wanted to play football in the water, which led me diving into the cold water for the ball. Then Jay just came running into the river because he didn’t want to think twice about cold water and joined our game of catch. It was challenging because of the temperature and flowing water. After about an hour of water time, the IYEL interns led us back to the campsites for dinner–a catered dinner of mac and cheese, BBQ chicken, pasta, and salad. Everyone loved the food, especially the mac and cheese!
After eating, the IYEL group split everyone into five groups and we had a dance off. Everyone enjoyed the dance off because it added an element of surprise because you could call out any group you want, and that group has to do a different dance rapidly or they are dropped from the competition. Being in a group with Jay, caused us to win because Jay was very quick to think of dance moves, we eventually couldn’t think of anymore and just came up with random movements, which is how we won. It was a very unique game that was very entertaining, even to those who claimed they did not enjoy it. 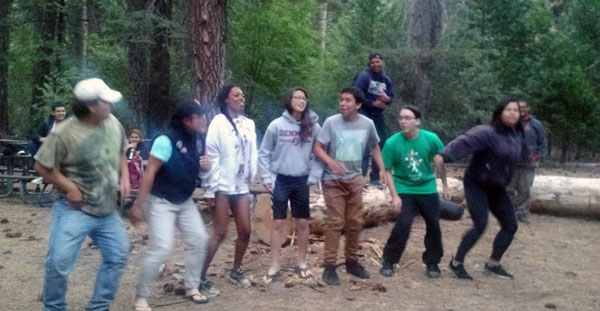 After the dance off, everyone went back to their separate groups and had 10 minutes to prepare some type of talent for the talent show. It was very difficult to think of ideas because we were hit by surprise, which left us dazed and confused. Jay then suggested a skit in which Carlos and I discuss how the day went. The skit was supposed to demonstrate the yin and yang, the balance of good and bad, showing that no matter how bad a situation is, there is always good too. We also used it as a way to thank IYEL for hosting such a wonderful trip and making sure every activity they planned and lead was fun, inclusive, and informative. All the organizations had wonderful skits and songs that made the night much more special. 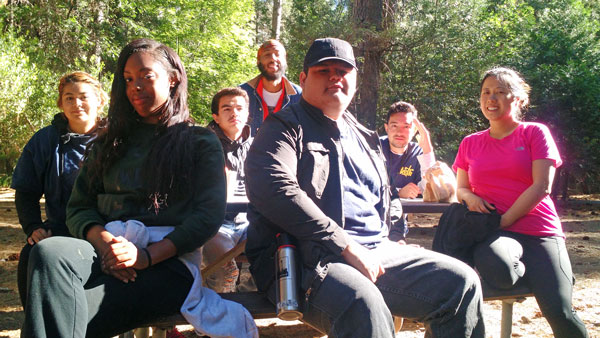 The feeling of friendship and positivity floated through the air and this was the strongest point of unity through the trip. Around 9 PM, we began to burn letters we wrote to someone we used to be friends with or a loved one reflecting on the positive times we had together. It was a tradition used in Chinese culture that believe the burning of the letter would let the thoughts travel to the person and they would feel positive energy. The last thing of the night was roasting marshmallows.

Friday, June 24, was the last day of our adventure. I woke up around 3 AM and I heard footsteps, but no zipper indicating that someone left their tent. Then after about five minutes I heard sniffing around the tent. I woke up Carlos and heard if he could hear it too because I wanted to be sure I wasn’t just being paranoid, and he also heard the same. We concluded it was a deer because deer have been spotted during the evening near the campsites. After waking, a chaperone asked if we heard the bear from last night. Carlos and I were shocked but also jazzed that we hear it.
When breakfast was finished we formed a circle and shared our thoughts of the entire camping experience. It was the first time camping for many, and most hoped to come back with their loved ones. It was a emotional closing circle, having made so many good friends. As we boarded the bus around 10 AM, it felt like I left part of my heart at Yosemite. I hope to return someday soon! 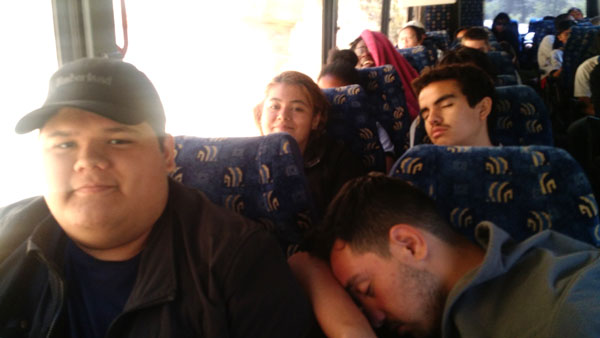 The IYEL group orchestrated a fantastic trip to Yosemite. Learning about the Buffalo Soldiers from Shelton Johnson was one of the highlights. Most of the IYEL group were teens, which was really inspiring. They stepped up to play the part of a leader for the enjoyment of everyone, and deserved their high praise. This trip to Yosemite will stay ingrained in all the people who attended. It was an unforgettable experience in a wonderful place with great new friends. Thank you so much!