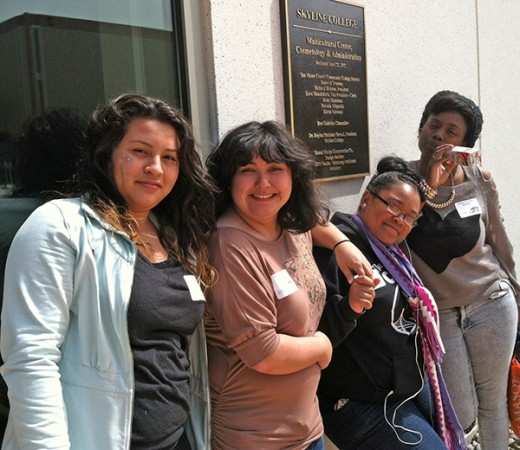 On Saturday, March 16th four female BEETS (Band of Environmentally Educated and Employable Teens) joined Lisa Drogin, BEETS Coordinator, for a day at Skyline College in San Bruno. Jennifer Rodriguez, Julianna Echeverria, Sydni Walker and Shontay Vessell spent the day meeting women who use science and math in their careers, as well as women in non-traditional careers. They attended workshops to see some of the things these women do on their jobs, and they learned about promising career opportunities. The teens were able to join workshops which conducted lab experiments, wired high-tech phone systems, examined microscopic creatures, and designed computer software. Each youth could attend three hands-on workshops during the all-day conference. They also participated in a problems and puzzles contest. The conference was sponsored by the Genentech Foundation for Biomedical Sciences. Skyline students escorted our teens to their sessions. Each of the teens in high school earned 0.5 units of college credit.