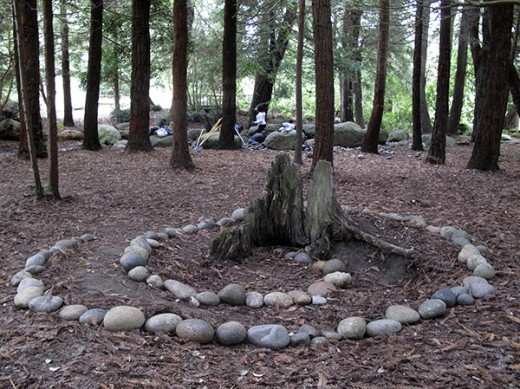 Our CommunityGrows Fall 2012 BEETS (Band of Environmentally Educated and Employable Teens) volunteered on Saturday, October 20th, 2012 from 8:00 AM to 1:30 PM at the AIDS Memorial Grove in Golden Gate Park. The National AIDS Memorial Grove is a dedicated space in the national landscape where millions of Americans touched directly or indirectly by AIDS can gather to heal, hope, and remember. The idea for the National AIDS Memorial Grove (NAMG) was conceived in 1988 by a small group of San Francisco residents representing a community devastated by the AIDS epidemic, but with no positive way to express their collective grief. They envisioned a serene place where people would come alone or in groups to hold memorial services, to remember among the rhododendrons and redwoods.

After a welcome by AIDS Grove Volunteer Leaders, and snacks, the BEETS joined a group of teens from the French American School to clear a stream bed of smooth round stones in preparation for an upcoming event. The BEETS, lead by Lisa Drogin, Program Manager, were assisted by Steve Nowaczky, and a Golden Gate Park Ranger. A great stewardship day and lots of fun!