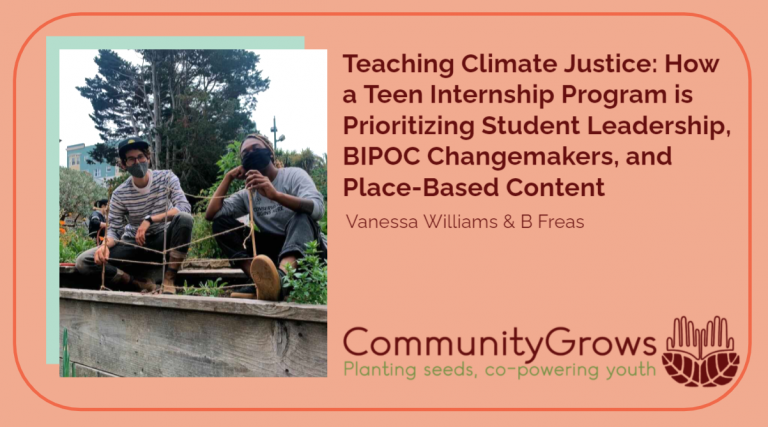 A few weeks ago 4 members of CommunityGrows (CG) presented at the Climate Insitute’s Teaching Climate Justice conference. At this event, a wide variety of speakers presented their work and reflections on climate justice and how it is represented and taught in the United States. Two of our BEETs (Band of Environmentally Educated Teens), Teresa Topete and Tiana Hubbard, presented their reflections on their environmental education and what the climate movement means to them. Following them, two staff members of CG, Vanessa Williams and B Freas spoke about how CommunityGrows is working in the environmental education space with an alignment towards social and climate justice.

Teresa, a senior at Lick-Wilmerding high school in San Francisco, is a second-year BEETs intern and has been passionate about environmental justice for as long as she can remember. In her presentation she spoke about how popular media often represents climate activism as insular, and that acts such as beach clean-ups, recycling, and refusing plastic straws will resolve climate change. She emphasized that this way of framing the climate crisis removes people from the equation and fails to recognize how the climate change disproportionately impacts low-income communities and people of color.  “Climate change is a people crisis just as much as it is an environmental threat. Climate change is interwoven in the foods we eat, the items we purchase, the industries we support and it is important that we start teaching this narrative to youth at a very young age.” she reminds listeners, and then began to discuss the ways in which her time with the BEETs has filled in the gaps that the education system has failed to teach her. In her closing remarks she acknowledged that “Some of the most powerful lessons I’ve experienced in the classroom have been about the history of Indigenous peoples, climate change, environmental justice, and youth activism. While just one lesson about climate change can make a huge difference to youth, these kinds of lessons are successful when they can be found throughout the school. Up until high school, I attended an underfunded public elementary and middle school, where the topic of climate change never came up. It wasn’t until I transitioned to an affluent private high school that I received the education every youth deserves to be exposed to. I’m talking about solar panels, community gardens, environmental justice workshops, and guest speakers. These are the kinds of lessons that go beyond the classroom. It is educational inequities such as this one, that not only overlap with socio-economic status but directly tie into race. The individuals who need this kind of education the most are the ones who lack it, but this does not have to be a reality.”

Tiana,  a senior at Mission High School, has been a part of the BEETs internship for 3 years and the board for 1 year. Over the last couple of years she has been getting more into climate change and climate justice. She began her presentation by reflecting on how climate change had been taught to her before joining the BEETs program. She explained that “for the last 3 years [the BEETs] has taught me more about climate change than I’ve ever known. As important as it is to every person and thing on planet earth you would think that it would be taught in school. But they never teach us the important stuff so i’m not surprised.” She went on about how even in agriculture and science classes, climate change was glanced over at best. Her speech expresses frustration with the education system, and a recognition that climate change is too important to hide from our youth being that they’re the ones who will be feeling its long term effects. She exclaimed that “the slightest bit of education about climate change can start a domino effect on people changing their lifestyles pushing us in the right direction”, and ended her speech with a call to action asking that teachers listening be open to learning about what is important to their students, and that climate change is precisely what’s important to them.

Teresa and Tiana’s words were powerful and well-received. Audience members gave feedback such as ” The young women who spoke yesterday really impressed me. Thanks for giving us the opportunity to hear their voices.” and “I learned so much from them.” These teens are fierce and empowered leaders; this will not be the last we hear from them and we are so deeply proud to know they will carry what they learned in the BEETs with them as they navigate adulthood and creating structural change.

Our educators B and Vanessa presented on teaching climate justice and how our BEETs program prioritized leadership, BIPOC Changemakers, and Place-Based Content. They explained how our organization operates, and focused on the BEETs program. B explained that the program is, in short, “a paid teen internship program focused on environmental justice, gardening, and job skills training.” They then transitioned to giving specifics on the program operations. The BEETs program is largely comprised of BIPOC youth, therefore special care is taken in ensuring that the guest speakers who interact with the BEETs reflect them and showcase a wide variety of climate and environment fields so that the teens are more aware of the paths in life available to them. They emphasized that the program prioritizes 3 main things. 1) Centering BIPOC leaders & their stories, 2) Empowering student voice & building leadership, and 3) Keeping content place-based & relevant. For each of the programs priorities B and Vanessa gave details on how they are crafting the BEETs to encompass these values, and in doing so created a conversation and inspiration for other teachers listening.

We’re incredibly proud of those who presented, and humbled to have been featured so that we can share how our program operates and inspire others.